Are you facing a crisis of cultural change or are you losing all of your most talented employees?

Are your skills not recognized, are you exhausted from facing always the same problems?

Are you not able to find your “flow” in competition, are your results not consistent with your potential?

NLP is a science and an art for achieving excellence in human behavior and performance.

What is coaching for us?

It’s the art of choice, purely and simply!

What is important for us is to see what works and give freedom and choice to our customers, in a context where they do not usually have a satisfactory choice.

We provide our clients with homework designed to provide them with counterexamples to limiting beliefs or behaviors, and to make them experience the difference in everyday life once they leave the practice of my coaching partners.

Where does NLP come from?

In the early 1970s, John Grinder, Richard Bandler, and Frank Pucelik made specific discoveries about the internal processes that high performers use to operate at genius level. Their ability to code (i.e. identify and describe) these processes and teach them to others has established the scope of NLP. We use models generated by NLP modeling (by the assimilation and coding of models that have been observed in geniuses in their domain).

John Grinder continued, first with Judith DeLozier in the mid-80s, then after 1988 with Carmen Bostic St. Clair, to refine and further develop the original coding, increasing the speed and efficiency of the results. These refined processes are what we call the New Code NLP. This one offers an excellent model for explaining how human beings carve the world that we think is a reality. In fact, the world we live in is our own world; the reality we create is our own reality, through conscious but above all unconscious processes.

For us, it is the alignment of the conscious and the unconscious which makes it possible to reach what we call “the state of grace”, of being “in the zone” or “in the flow”. Their non-coordination is the source of the problems. Our work is aimed at establishing this coordination. 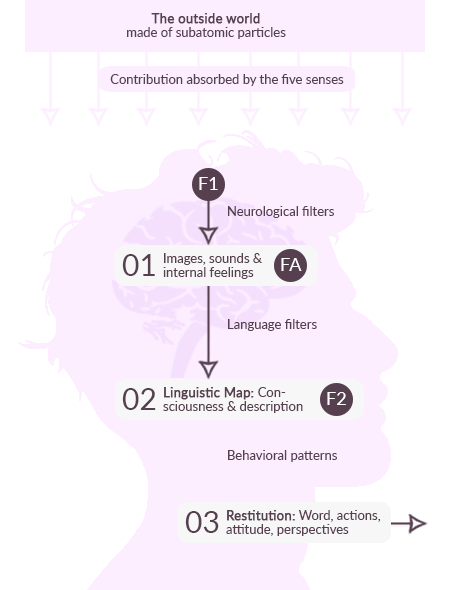 Our reality is the result of a neurological filtering process (F1 and F2), activated when our five senses absorb the millions of bits we are exposed to each day. Then, through language, we give meaning to these events (internal images, sounds, tactile awareness, internal sensation, taste and smell). It is the linguistic representation, or second experience (F2), which will determine our actions, words, attitudes and perspectives (3).

Unlike other forms of coaching, New Code NLP works on the “mental map” or first accessible internal map (1). It is made of internal images and sounds, touch, internal sensations, taste and smell. Close your eyes and remember the last time you smiled: see what you see, listen to what you hear and feel what you feel, this is your first internal map accessible!

The New Code NLP will work on internal images, sounds, tactile awareness, internal sensation, taste and smells so as to transform these experiences into more appropriate actions, words, attitudes and perspectives, in the specific context identified, to our clients.

We clarify the framework of our intervention. We identify ineffective behaviors, clarify, define and facilitate the expression of the intentions and objectives of our clients.

We validate intentions and objectives through key performance indicators (KPIs). We establish an action plan and an adapted coaching program, approved and signed by both parties.

Our clients experience the difference. They respond more appropriately in the contexts identified and measure their progress towards their goals through regular reviews.

Why does it work?